If Music Is Your Passion, Cremona Would Satisfy You as The City of Music

Cremona, another beautiful Italian City in Lombardy Region, is known as the city of music and home to Antonio Stradivari, the craftsman of world’s most expensive violins, with new record set to around €38 millions (triple to the latest other violin sold in 2011) for the Macdonald Viola according to the last auction in 2014 (as the violin was made during Stradivari’s golden years in the 18th century).

Stradivari’s other collections and the other world’s oldest violins can be found at one of Cremona‘s museums, The Stradivari Foundation. The museum still houses the oldest, finest and most expensive violins from hundreds of years ago.

The museum is open to public with ticket purchase. In 2012, I luckily got the chance to visit it with a group of study tour. There, I had the opportunity to see (hear) a short performance of one Stradivari’s violin.

And even if I’m not someone from musical field, I could feel that it was one of the finest arts for violin instruments.

You can always visit the museum as it’s opened six days a week except Monday and there is always a reduced price for group tour or school students. Further information can be found at http://www.museodelviolino.org/en/biglietti/

Not only housing the greatest arts of musical instruments, Cremona also has an amazing theater with stunning interior design, the Ponchielli Theater.

This theater was built in the 18th century with original name “Nazari Theatre” and now it has been well-known as the Municipal Theater since 1986.

When it was inaugurated for the first time on October 4, 1986; it was mentioned that outstanding performances of two historical Violins had been done.

The violins performed for the opening of the theater included Stradivari’s “Il Cremonese” and Guarneri’s “del Gesu” (1715 and 1734).

In addition to the greatest violin instruments and also the stunning theater, Cremona also has its main Cathedral with original Romanesque architectural style, which then was restored also with Gothic and Renaissance elements. The Cathedral areas included three parts.

The Church Itself and Baptistery 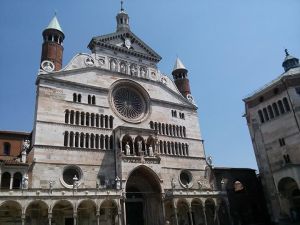 As you can see on the facade, it was stated to be one of the most important Romanesque styles in Europe, which portal area was from hundreds of years ago; since the 12th Century.

Inside the Cathedral, there are the Frescoes of scenes from Abraham, Isaac, Jacob and Joseph, which were between the end of 14th century to the beginning of 15th century.

Furthermore, The Baptistery that’s located right on the side of the Cathedral and annexed to the church itself, was also built in 12th century and it reflects the Milan’s St. Ambrose. It is also the symbol of Eight Day Resurrection and the Baptism.

The Torrazzo or the bell tower is recognized as the third tallest in the world, which is around 113 meters. The tower’s construction was said to be started in the middle of the 8th century. But, the construction was completely finished in the beginning of 14th century.

As the third tallest building for bell towers in the world and the tallest in Italy, the torrazzo has around 500 stair steps and when you reach the top, you’d see the gorgeous view of the whole Cremona.

And, when you enter and go up to the bell tower, you’d also find the largest astronomical clock in the whole world that was created and designed in the 16th century.

This biggest clock represents the entire zodiac constellations with the sun and moon moving around them, interesting right ? 🙂

And surely once more, I’d like to say that climbing to the tower would be best to do not during extremely hot summer but instead, it’d be a lot better during fresh seasons like Autumn or Winter, or well, at least in Spring as it takes energy :p

Feel free to tell me your thoughts! :) Cancel reply

This site uses Akismet to reduce spam. Learn how your comment data is processed.